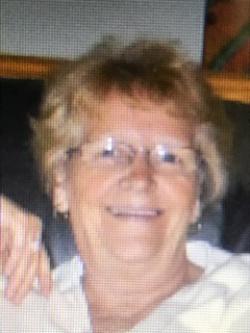 It is with heavy hearts that we announce Pearl Elisa Jensen of New Denmark, NB passed away unexpectedly at Hotel Dieu St. Joseph Hospital on June 11, 2019.

Pearl was born in New Denmark, NB, on May 10, 1944. She was the daughter of the late David and Kirstine (Lauridsen) Jensen.

Pearl leaves behind her loving husband of 52 years, Robert Jensen; her daughter Donna Jensen (Lindsay Bourque) of Quispamsis, NB and her pride and joy – her granddaughter, Sydney Bourque, who will cherish the many special memories made with her grandmother forever. She also leaves behind 5 very special sisters, with whom she was very close: Myrna Nielsen of Scarborough, ME; Patricia Graham of Mapleton, ME; Phyllis Kilfoil (Fred) of Westbrook, ME; JoAnn Madsen (Remo) of Cranford, NJ; Joan Moore of Vancouver, BC as well as multiple nieces and nephews.

Pearl worked as a proof teller at the Royal Bank in Grand Falls for 33 years. She also worked on the family potato farm especially at harvest time. After retirement, she enjoyed meeting regularly with the retired “Royal Bank girls” for lunch. She was also a member of the Red Hat Society. Pearl and Bobby enjoyed going to the dances in New Denmark and especially the Harley Pedersen dance in those retirement years. She loved music and played the piano for friends and family.

She liked nothing better than when her sisters and their families would gather, often in later years at the “19th” of June on New Denmark’s founders day, which became the centerpiece of family celebrations of the Danish heritage, which she was so very proud of. Pearl carried this heritage on by speaking the Danish language with her husband, her sisters and their families.

Pearl's life was enriched by her many friends over the years with whom she was involved in community events, social functions and just plain coffee dates at McDonalds or Tim Hortons.

Music for the service was by Phyllis Kilfoil, JoAnn Madsen, Joan Moore, and Patricia Graham. A Danish prayer was recited by Rev. Remo Madsen. The eulogy was given by Joan Moore.