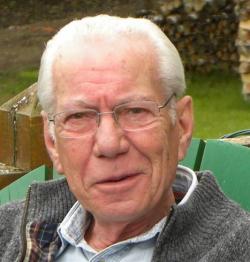 Following a lengthy illness, Clifton Thomas Goodine of Perth-Andover, NB, passed away peacefully at the Victoria Glen Manor on June 25, 2019.

Clifton was born in Morrell Siding, NB, on June 28, 1941. He was the son of the late Eveleigh and Pauline (Brayall) Goodine. Clifton leave behind his loving wife of 58 years, Nancy Goodine (Thibodeau); his daughter, Julie Goodine (Norman Green) of Upper Kintore, NB; his sisters, Sheila Gillespie and Sharon Hicks, both of Fredericton, NB; along with several nieces and nephews.

Clifton was predeceased by his parents; his sisters, Joyce DeMerchant, Alberta McGinley, and Rheba Gamblin.

Funeral service was held on Saturday, June 29, 2019 at 2 pm from Brunswick Funeral Home. Father Gilbert Doddatto officiated. Interment will be in Our Lady of Mercy Catholic Cemetery at a later date.

Music for the service was by Carol Andersen. The eulogy was given by Clifton's sister, Sheila Gillespie. A poem was read by Julie Goodine. A reading was by Sharon Eagan.