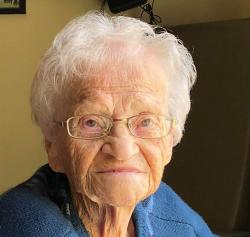 Following a lengthy illness, Gladys "Dolly" Turnbull of Aroostook, NB, passed away peacefully at the Victoria Glen Manor on August 16, 2019.

Dolly was born in Dover Hill, NB, on February 13, 1923. She was the daughter of the late Clayton and Wilma (Scott) Kilcollins. Dolly leaves behind her son, Dana Pirie of Aroostook, NB; five grandchildren and six great grandchildren; her sister, Gaynell Ogilvy (Glen) of Tilley, NB; along with many nieces and nephews.

Music for the service was by Carol Andersen and Earlon Brayson. The eulogy was given by Melanie Pirie.