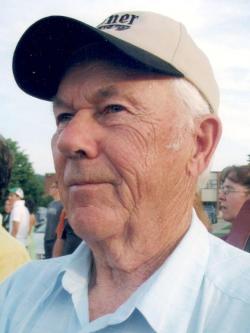 Peter was born in Tobique Narrows, NB, on May 3, 1928. He was the son of the late William and Elizabeth (Wallace) DeMerchant. Peter leaves behind his daughters, Carlene Underhill (Gregory) of Bath, NB, Karen Sullivan (Gaylen) of Four Falls, NB, Kathy Swazey (Darryl) of Four Falls, NB, Tammie Wright (Dana Jr.) of Kilburn, NB; ten grandchildren and five great grandchildren; his sister, Reta Jamer of Enfield, NS; his brother-in-law, Robert O'Regan (Lynda) of Woodstock, NB; along with many nieces and nephews.

Peter worked for NB Power for many years prior to his retirement. He was a member of the Masonic Lodge, the Shriners, the Perth-Andover Elks Club, and the Order of the Eastern Star.

Music for the service was by Barbara Moran, Lorie Tracey and piper Darlene Morton. The eulogy was given by Norman DeMerchant. Other remembrances were shared by Donnie Moran and Ron Gaunce. A poem was read by Jodi Meyer.