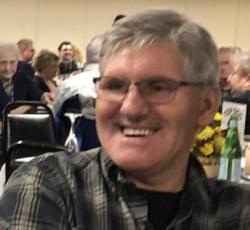 With his family by his side, Raymond Dale Bowmaster of Bairdsville, NB, passed away peacefully at Hotel Dieu St. Joseph Hospital on September 14, 2019.

Raymond was predeceased by his parents; his brothers, Roy and James Bowmaster; his sisters, Patricia and Debbie Bowmaster.

Music for the service was by Carol Andersen and Earlon Brayson. The eulogy was given by Peter Bowmaster. Peter also carried his brother's urn.