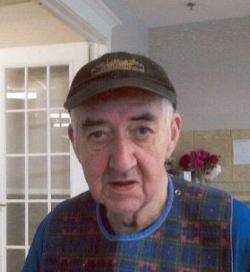 James was born in Gladwyn, NB, on November 15, 1943. He was the son of the late Hazen and Phyllis (Stacey) Finnamore. James leave behind his sister, Louise Lapointe (Gerald Burke) of Saint John, NB; his brothers, Richard Stacey (Joanne) of Perth-Andover, NB, John Finnamore (Emily) of Jacquet River, NB, and Norman Finnamore (Eileen) of Saint John, NB; along with many nieces and nephews.

Funeral service was held on Thursday, October 3, 2019 at 11 am from the Tobique Chapel. Rev. Emile Arsenault officiated. Interment followed in the Rowena Baptist Cemetery.

Music for the service was by John and Sheila Burgoyne.

James' family would like to say thank you to the staff of the Tobique Valley Manor for the care they gave him. A special thank you to Isabelle Carter and Nancy Goodine for all the compassion you showed James at the hospital while visiting your husbands. It was greatly appreciated.