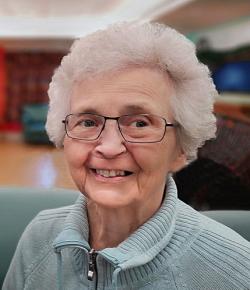 Shirley DeMerchant of Perth-Andover, NB, passed away peacefully at the York Care Center in Fredericton, NB, on October 2, 2019.

Shirley was predeceased by her parents; her husband of 65 years, Stephen DeMerchant; her sister, Annie Watson; her brothers, Earl, Raymond, and George Hammond.

Shirley loved her family and was a very hard worker. She worked along side of Stephen many hard hours on a potato farm. She had a Bed and Breakfast for several years, loved meeting new people, and showed much hospitality. She was a cook/baker in many of the local establishments. She had an amazing smile that she never lost.

Her last 3 1/2 years were spent at York Care Centre in Fredericton where she had exceptional love and care given to her.

Music for the service was by Rev. Greg Geldart and organist Carolyn Kinney. The eulogy was given by Bill DeMerchant. A poem was read by Sandra DeMerchant.