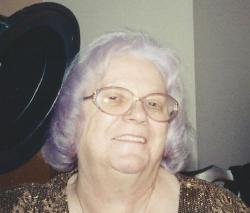 With her family by her side, Gwen Bernard of Tobique First Nation, NB, passed away peacefully at the Victoria Glen Manor on October 7, 2019.

Gwen was predeceased by her parents; her husband, Peter Bernard; her great grandson, Brady Perley-Francis; along with two sisters and three brothers.

Music for the service was by Tracey Hamilton. The eulogy was given by Gwen's grandson, Brett Bernard.