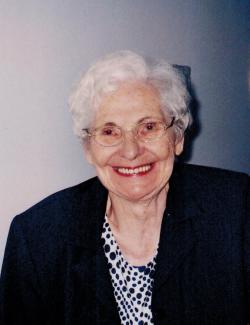 Irma Nadeau, formely from Iroquois, passed away at the Résidences Jodin Inc. of Edmundston, on January 15, 2020, at 95 years and 8 months of age. She was the daughter of the late Alfred and the late Anna (Caron) Nadeau.

She leaves behind her nieces and nephews : Nancy - Patricia - Michael - Paul - Daniel - Francine - Léonie along with many cousins.

For those who wish, donation to the Bob Fyfe Foundation would be appreciated by the family.