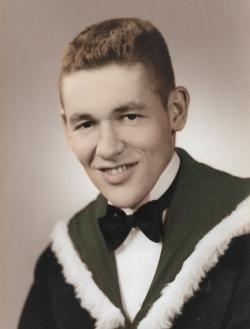 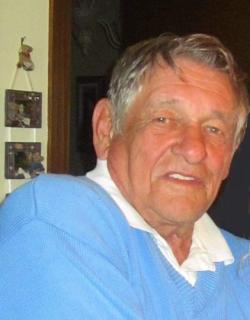 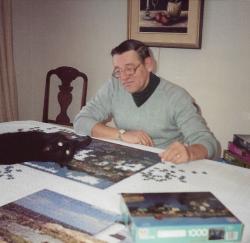 Gary was born in Barrington, Nova Scotia on June 29, 1935. He was the son of the late Harry and Violet (Peach) Hatchard. Gary is survived by his loving wife Joanne Hatchard (Gandy) of 59 years; his sister Dawn (John) Mueller of Halifax, NS; his sons, Greg (Charlotte) Hatchard of Oromocto, NB, Brent (Michele) Hatchard of Perth-Andover, NB and Scott (Christine) Hatchard of Kingsville, ON; grandchildren Nathan, Trey, Brandon, Taylor, Alyssa, Meaghan and Charley; great-grandchildren Simon and Oliver.

Gary and his sister Dawn spent their formative years in Windsor, NS where their father worked as manager of the local Nova Scotia Textiles plant, a manufacturer of Windsor Wear underwear. As a teenager Gary attended the prestigious King’s College preparatory school in Windsor, NS on a hockey scholarship, graduating in 1953.

Gary’s post-secondary education commenced at Acadia University in Kentville, NS, where in 1957 he graduated with a Bachelor of Science degree in Applied Science. While attending Acadia he was a member of both the varsity golf and curling teams. During this time, he also worked as an ambulance attendant. Gary would often regale his friends and family with tales of these adventures. Following Acadia, he attended the University of New Brunswick in Fredericton where he graduated in 1959 with a Bachelor of Science degree in Civil Engineering.

Gary began his professional career in 1959 as a Civil Engineer working for Irving Oil in both Saint John and Fredericton, NB. After three years Gary moved to the Perth-Andover area to work with United Contractors and eventually started his own engineering consulting business. This consulting firm, which Gary retired from in 2008, continues to operate under the direction of his son and fellow civil engineer Brent.

Although Gary’s business activities centered around his consulting firm, over the years he owned and operated a wide variety of enterprises, including a construction company, a hardware store, a country store, a service station, a Christmas tree business and a sawmill. At the peak of this activity Gary had over 100 people working in his various enterprises.
Gary’s extra-curricular activities, memberships and philanthropic efforts were extensive and too numerous to mention. Some of these included:
• Councillor, Village of Perth-Andover, 1967-1969
• Chairman, Aroostook Valley Country Club (AVCC) Bicentennial Pro-Am Golf Tournament, 1976
• President, Aroostook Valley Country Club, 1985-1986
• Member, Association of Professional Engineers and Geoscientists of New Brunswick
• Member, Aroostook Valley Country Club
• Member, Perth Elks Lodge #362
• Member, Masonic Lodge of Perth-Andover

Although his grandchildren regularly called him grumpy, Gary was a soft touch and generous to a fault, often contributing to his community in discrete ways. Whether it was helping a local contractor get started by feeding them some work, sending an anonymous gift to someone experiencing a sudden downturn, or giving a local underdog a job to prove their worth, Gary went out of his way to do what he could to help out his fellow citizens.

Gary was an avid hockey player, playing for several intermediate and senior teams and coaching at various levels. He also enjoyed cooking, gardening, jigsaw puzzles and the occasional drink of rum and coke.

Respecting Gary’s wish, there will be no visitation or funeral service.