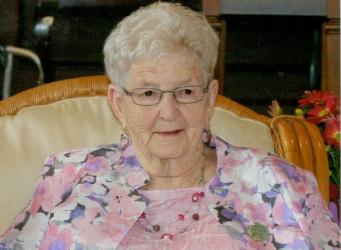 Irene Giberson of Perth-Andover, NB, passed away peacefully at the Victoria Glen Manor on the morning of May 19, 2020.

Irene was born in Danforth, ME on May 11, 1924. She was the daughter of the late Wesley and Frances (Horne) Farrell. Irene leaves behind her grandchildren, Amy Evans (Neil), Laura Geiger (Ed), Jimmy Giberson, Wayne Roach (Jacqueline); six great grandchildren; her daughter-in-law, Sheila Giberson of Lacey, WA; and her close friends, Rick and Eliane Sullivan of Upper Kintore, NB

Irene was a member of the UCW, the Tobique Craft Group, and the Keenagers. Irene could always be found anywhere there was a game of 45's was been played. She and her husband, Gerald, owned and operated the Riley Brook General Store for many years. She was always up for a new adventure. She even did the zip-line in Grand Falls at the age of 90 years. She enjoyed traveling all over the world on countless trips with family and friends. She would never let anything get in the way of a good vacation.

Due to the restrictions because of the Covid-19 situation, a celebration of Irene's life will be held at a later date. Interment will be in the Riley Brook Community Cemetery.