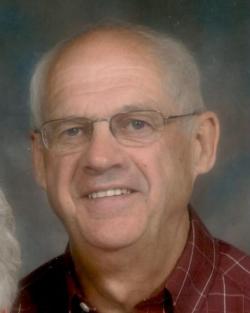 Richard grew up on his parent’s Clifford and Margret’s Knoxford farm and homestead in the 1940’s and 50’s. It was a life of work and play with his older brother Joe and younger siblings Dan, Alice, Carol and Lee. Days for the Lockhart children were spent doing chores like feeding the cows, cutting wood, baking, laundry by hand, collecting the daily chicken egg yield.

Time for play included classic activities of old including hide and seek, tree swings, horseshoe toss, as well as mischievous activities for Richard and Joe…. such as antagonizing their younger siblings as well as the resident goat, joy riding without permission in their father’s truck, and many other incidents too numerous to cite for this tribute. Suffice it to say, as partners in crime, they managed to generate hours of “entertainment” for themselves.

Richard in his late teens and 20s continued to support the family farmstead while embracing life as a young man, driving souped-up cars, going to the movies and general carousing. Richard became known as “Dick” to those closest to him, developing a reputation as a “real nice guy who would do anything to help you out” yet he embraced his inner rebel, savouring his cigarettes and engaging in the odd road-house rumble here and there. These traits allowed him to build special friendships with that endured until his very final day.

He had known Beatrice Brayson for a number of years but took a special interest in her in her in 1966 as she was coming out of her nursing education. The courtship lasted 3 years and they were married in 1969.

This new life included living in apartments, couples’ parties with friends, and gaining his mechanic License. Richard worked very hard as a mechanic in the 50s, 60s and 70s developing knowledge and skills that made him a go-to-authority on cars and automotive.

Dick and Beatrice’s first child, Peter arrived in 1971. Barbie, then Jeffery and Wesley followed, all born before the start of the 80s. Richard and Beatrice continued to work hard and support the household, managing bills and 4 busy kids. Richard raised his children as a caring life skills teacher and patriarchal figure.

To his credit, Richard kept the ties close with his parents, adult siblings, their spouses and their children. Many a Saturday and Sunday were spent back at the Knoxford farmstead, where family get togethers saw cousins playing in the apple orchard and on the junked cars, and adults, in particular, Dick, dishing out good natured ribbing and trading nap time on the couch with his brother Joe. He also was a respected brother in-law to Beatrice’s siblings and spouses and would welcome Earlon and Julie, Leon and Maggie, Charlotte and Bob, and Francis and Giselle with a warm smile and cold beverage of their choice.

In the 80s, Dick followed in the footsteps of his brother Joe and launched a change of career into the world of antique collection and selling. Partnering up once again, Dick and Joe established the D&J trading post, buying and selling antiques of all genres for over 12 years, wheeling and dealing and building a business reputation as fair and good-willed dealers. Many adventures in forging for Antiques ensued, from lifting 600lb pianos out of basements to scavenging tight crawl spaces for antique dolls.

This would grow into more than a job for Richard. His passion for collectibles continued for the rest of his days, attending trade shows and markets. He was meticulous in finding the right deals, yet his generous nature always gave others the best deal possible.

As his children, nieces and nephews grew up and friends grew older, Richard became the all-around, great reliable dad, uncle, and friend that he was meant to be. He’d always ask how things were going, cast out a friendly tease balanced by words of encouragement and being there for the smallest of things as well as the biggest milestones in life. He saw his children and nieces and nephews obtain driver’s licenses, graduate, get their first cars, get married, buy first homes and ultimately, have children.

Richard mellowed and softened as he got older. He was still the good and caring son to his elderly Dad and Mother and ever the reliable brother and friend to Carol, Lee, Dan, Alice, and Joe. He was a pillar of comfort during the tragic passing of Joe and Alice.

His heart grew 3-sizes when his grandchildren entered the picture. From his 60’s onward, Richard’s heart may have been driven by a pace-maker, but the love and pride he had for his grand children out-paced all other endeavors.

While Richard continued to support his adult children by helping in all ways he could, from car repairs, to tree cutting, to house repairs, and swing sets, he was the dotting “Grampy” to his grand children, Jonah, Dannika, Amelia, Logan, Cameron, Ruby, Bella and Sylvie, treating them like they were the crown jewels. He relished time with all of them, whether in person at home, giving them tractor rides or over phone calls and video calls with the lively brood in Fredericton and Scotland.

He simply was the best Husband, Father, Brother, Uncle, Grandfather and Friend that anyone could ever have. This is his enduring legacy and why he will be so greatly missed.

Respecting Richard's wishes, there will be no visitation or funeral service held. A private graveside will be held at a later date. Interment will be in St. Mary of the Angels Catholic Cemetery.

For those who wish, memorial donations to the Making a Difference Food Bank would be appreciated by the family.