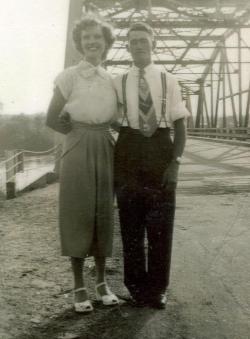 Rowena Pearl Murchison of Perth-Andover, formerly of Four Falls, NB, passed away peacefully at the Victoria Glen Manor on June 19, 2020.

Rowena was born in Limestone, ME, on January 10, 1929. She was the daughter of the late Eugene and Nancy (Parks) Kenneson. Rowena leaves behind her daughters, Sheila Kelley of Aroostook, NB, Valerie Gee (Andy) of Aroostook, NB; her sons, Carroll Murchison (Johanne) of Québec, Winfred Murchison (Anna) of Perth-Andover, NB, Alton Murchison of Ontario; 12 grandchildren, 17 great grandchildren, and one great great grandchild. Rowena was the last surviving member of her family.

She was predeceased by her parents; her husband, Arnold Murchison; her sons, Kevin, Keith, and Jeffrey Murchison; her sisters, Ruth MacLeod and Helen Lloyd; her brothers, John and Darrell Kenneson.

With her son and her daughter by her side, Rowena drew her last breath. She has made it to the finish line at long last. Attending church was very important as she was and old fashion Christian. Attending the church at Limestone Siding when the kids were small and later at Four Falls Apostolic Church.

Arnold and Rowena married on August 10, 1951 and live a long happy life together. Rowena never got over losing Arnold almost ten years ago. they lived in Four Falls for over 60 years together until Arnold's health started to fail. Arnold entered the Victoria Glen Manor on the Perth side, so Rowena moved into an apartment beside him and visited him everyday. She lived alone for nine years with help from home care workers with whom she formed some lasting friendships. When it came time for her next move, it was to the Victoria Glen Manor at the age of 90 years. She lived there exactly eight months to the day and celebrated her 91st birthday there.

Rowena spoke often about sometimes weekly visits from a very special nephew and his wife (Leigh and Brenda Kenneson) and how much it meant to her. They visited her while in her apartment in Perth and continued at Victoria Glen Manor.

Rowena's family would like to extend a special thank you to the nurses and staff for her care at a very difficult time in her life.

Thank you to Wendy Goodine, special niece, Registered Nurses Heidi, Mary Jose, Cynthia, and many others who comforted and look after her during her time there.

Rowena became fast friends with the lovely Noella Dixon as they were close neighbors and shared both tears and laughter.

She will be forever missed and loved so much by her kids, grandkids, and many others who knew her.

Music for the service was by soloist Alisha Lee and pianist Perry Swazey. the eulogy was given by Valerie Gee.