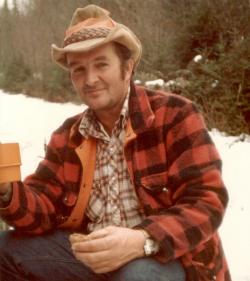 Norman was predeceased by his parents; his infant daughter, Jean; his sister-in-law, Debbie Tapley; his brothers-in-law, Richard Arden, Jim Lacey, and James Goodine.

Norman was a bulldozer operator during his career. He enjoyed any outdoor activity, especially hunting and fishing. He taught all his children and grandchildren the art of hunting and fishing. Norman also enjoyed playing cards games such as 45's and cribs. He was also a member of the Royal Canadian Legion, Branch # 29, of plaster Rock, NB.

Respecting Norman's wishes, there will be no visitation or funeral held. A graveside service will be held at Burntland Brook Cemetery at a later date.

For those who wish, memorial donations to the Burntland Brook Cemetery, the Victoria County SPCA, or the Mamma Bear Cancer Fund would be appreciated by the family.