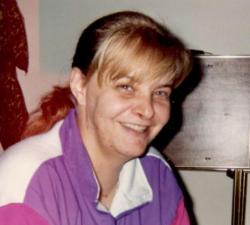 Anna was born in Plaster Rock, NB, on December 7, 1960. She was the daughter of Joyce O'Hagan (Finnamore) and the late Burton Craig. Besides her mother, who lives in Craigs Flat, NB, Anna leaves behind her daughter, Jamie Laking (Michael) of Fredericton, NB; her son, Zachery Craig of Perth-Andover, NB; her granddaughter, Emma Laking; her sisters, Judy Craig of Craigs Flat, NB, and Jenny Craig of Grand Falls, NB; her step-sisters, Rhonda Meeuwsse (Andrew) of Dunnville, NB, Debbie McConnell (Bob) of Port Dover, ON; her step-brother, Wayne O'Hagan (Tracy) of Hamilton, ON; along with several nieces and nephews.

Anna was predeceased by her father; her step-father, Hayden O'Hagan; her sister, Donna Craig; her brothers, Robert, Phillip, and Ivan Craig.

Funeral services was held on Wednesday, September 30, 2020 at 2 pm from Brunswick Funeral Home. Father Gilbert Doddatto officiated. Interment will be in Forest Glen Cemetery at a later date.

The eulogy was given by Tasha Craig

In lieu of flowers, memorial donations to the Dr. Everett Chalmers Regional Hospital Pediatric Unit would be appreciated by the family.