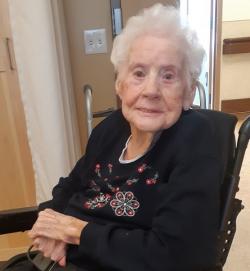 With her family by her side, Jane Wright of Perth-Andover, NB, passed away peacefully at the Victoria Glen Manor on Friday, October 23, 2020.

Jane was born in Everett, NB, on January 15, 1924. She was the daughter of the late Abraham and Lenta (Padget) Ruff. Jane leave behind her daughters, Janet Rees-Gee of Stanley, NB, Cheryl O'Neal (Aden) of California Settlement, NB; her sons, Allan Pelkey (Pam) of Fredericton, NB, Michael Pelkey (Phyllis) of Perth-Andover, NB; her sister, Marie Larose (Len) of Kingston, ON; her brother, Arthur Ruff of Perth-Andover, NB; thirteen grandchildren, along with numerous grandchildren, great grandchildren, nieces, and nephews.

Jane was a veteran of the Second World War. She was an ambulance driver in England during the war. She was also a member of the Royal Canadian Legion, Branch # 29, and the former President of the Legion's Ladies Auxiliary.

Funeral service was held on Tuesday, October 27, 2020 at 1 pm from Brunswick Funeral Home. Rev. Todd McGuire officiated. Interment will be in the Burntland Brook Cemetery at a later date.

Music for the service was by Rev. Todd and Penny McGuire. Remembrances were shared by Paula Leblanc and Jeff Porter.