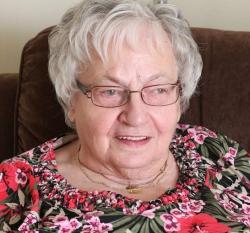 Clara was born in Wicklow, NB, on May 11, 1932. She was the daughter of the late Donald and Mary (Squires) Wheeler. Clara leaves behind her daughters, Nancy Seely (Kevin) of Salisbury, NB, Donna Grant (Stephen) of Saint John, NB; her son, Jerry Broad (Laurie) of Johnville, NB; her six grandchildren and twelve great grandchildren; her sisters, Martha Southan (Bert) of Wicklow, NB, Jackie Hitchcock of Amherst, NS; her brother, Michael Wheeler (Linda) of Woodstock, NB; her sisters-in-law, May Wheeler of Eastern Passage, NS, Maxine Townsley of Perth-Andover, NB; along with many nieces and nephews.

Music for the service was by Reginald Wynes, Tommy Ryan, and Michael Wheeler. The eulogy was given by Samantha Grant and Rod Green.