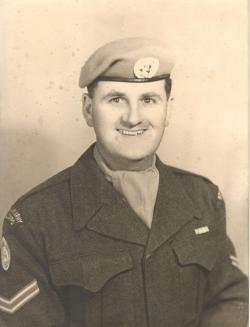 Following a brief illness, Douglas Thomas Shannon of Plaster Rock, NB, passed away peacefully at the Dr. Everett Chalmers Regional Hospital on the evening of November 2, 2020.

Doug was born in Plaster Rock, NB, on November 9, 1927. He was the son of the late Thomas and Cora (Mockler) Shannon. Doug leaves behind his daughters, Heather Llewellyn (Stephen) of Fredericton, NB, Lisa Smith (Ronald) of Fredericton, NB; his grandchildren, Morgan Llewellyn, Kerys Llewellyn (Sean Beauchamp), Jessica Smith, Jack Smith, and Arianna Smith; his brother-in-law, Bobby Caldwell of Toronto, ON; along with several nieces and nephews.

Doug was predeceased by his parents; his wife, Jacqueline Shannon (Johnson); his son, Kevin Shannon; his sisters, Catherine Giberson and Carolyn Caldwell; his brothers, Clifton and Edward Shannon.

Doug served in the Canadian Military from 1948-1973. He served for the U.N. in the Gaza Strip during peacekeeping. He was a retired vehicle technician. He was also a member of the Royal Canadian Legion, Branch # 29.

In keeping with Doug's wishes, there will be no visitation or funeral service held. Interment will be in the Burntland Brook Cemetery.

For those who wish, memorial donations to the Royal Canadian Legion, Branch #29, the Victoria County SPCA, or the NB Heart and Stroke Foundation would be appreciated by the family.