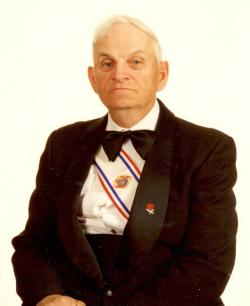 James Albert Dionne of Gladwyn, NB, passed away peacefully at the Tobique Valley Manor on the morning of December 23, 2020.

James was born in Gladwyn, NB, on August 26, 1933. He was the son of the late James E. and Ellen (Dugan) Dionne. James leaves behind his daughters, Eileen Wiseman (Brad) of Rusagonis, NB, Michelle Dionne (Rena) of Toronto, ON; his wife, Hilda Dionne (Denny) of Fredericton, NB; his granddaughters, Kristen Wiseman-Nicholson (Garrett) of Toronto, ON, Sarah Wiseman (fiancé Colby) of Fredericton, NB; his sister, Dorothy Usrey of Ocala, FL; along with several nieces and nephews.

James was predeceased by his parents; his sisters, Thurza "Bette" Dionne and Marie Bouchard; his brothers, Kenneth and Albert Dionne.

Due to the current restrictions, James' family has decided to postpone the visitation and memorial service until later this summer.

In lieu of flowers, memorial donations to the Sacred Heart Catholic Cemetery would be appreciated by the family.