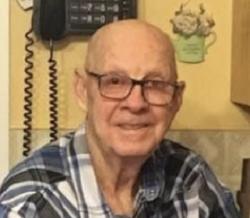 With his family by his side, Leslie Harding of Plaster Rock, NB, passed away peacefully at the Tobique Valley Manor on March 20, 2021.

Leslie was predeceased by his parents and his sister, Mildred Harding.

Leslie had one true passion in life, watching his grandchildren play hockey. He never missed any of their games and would travel all over the province to watch them play. He was affectionately known as Papa by all his grandchildren. Leslie would do anything to help his grandchildren no matter the situation. From doing mechanic work on their cars or making sure they had enough money to get back to college after a weekend visit home, he did it all. He was very proud of his grandchildren. Leslie was a die hard Montreal Canadiens fan. He would not leave you guessing who his favorite team was neither. Leslie also enjoyed cutting wood and would make sure all his family would have enough wood to burn to make it through the winter.

Respecting Leslie's wishes, there will be no visitation or funeral held. A graveside service will be held at Linton Corner Cemetery at a later date.

For those who wish, memorial donation to the Canadian Parkinson's Society would be appreciated by the family.