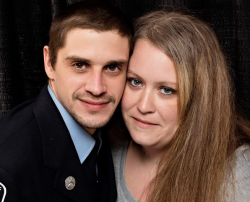 It is with great sorrow that the family of Rachael Godbout of St-André, NB, announce her passing at the Saint John Regional Hospital on August 23, 2021.

Racheal was born in Perth-Andover, NB, on June 6, 1985. She was the daughter of Peter and Nancy (DeMerchant) Swazey or Rowena, NB. Besides her parents, Racheal leaves behind her husband, Maurice Godbout; their children, Alexander Godbout, Hayden Godbout, and Emily Godbout, all at home; her brother, Jamie Swazey (Michelle) of Perth-Andover, NB; her paternal grandparents, John and Dianna Swazey of Rowena, NB; nine nieces and nephews; along with several aunts, uncles, cousins, and many friends.

She was predecaesed by her maternal grandparents, Angus and Audrey DeMerchant; and her uncle, Phil Swazey.

Music for the service was by Rev. David and Roma Ferrell along with members of the Godbout Family. The eulogy was given by Rachael's brother. Jamie Swazey.