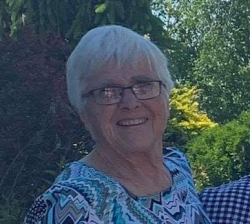 Rosalie was born in Johnville, NB, on May 26, 1938. She was the daughter of the late Joseph and Helen (Kilfoil) Mahoney. Rosalie leaves behind daughter, Margaret Pirie of Mineville, NS; her sons, Michael Pirie (Cathy) of Woodstock, NB, and Robert Pirie (Tobi) of Woodstock, NB; her grandchildren, Jackson, Andrew, Jack and Trinity; her sisters, Alice Whelton of Ottawa, ON, Marion Cassidy of Hopewell Junction, NY, Joan Jones (Johnny) of St. Stephen, NB; her brothers, Leo Mahoney (Anne) of Moncton, NB, and Thomas Mahoney (Rosaleen) of Summerside, PE.

Rosalie was predeceased by her parents; her husband, Jack Pirie in 2017; her sister, Gertrude; her brothers, John, Ambrose, and Bill Mahoney.

Rosalie worked as a registered nurse prior to her retirement. She was also a member of the St. Mary of the Angels C.W.L.

Funeral service was held on Friday, September 3, 2021 at 11 am from St. Mary of the Angels Catholic Church. Father Gilbert Doddatto celebrated. Interment followed in the parish cemetery.

Music for the service was by members of the Johnville church choir. The eulogy was given by Rosalie's daughter, Margaret Pirie. The urn was carried by Rosalie's grandson, Jack Pirie.