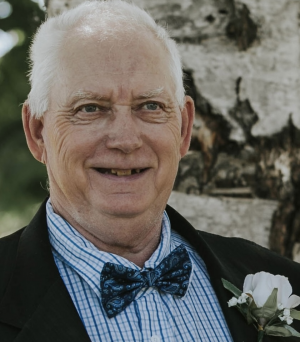 It is with heavy and sad hearts that the family of Kenneth Joeman "Joey" Hersey of Lake Edward, NB, annouces his passing on Saturday, October 30, 2021 at Hotel Dieu St. Joseph Hospital with his family by his side and following a lengthy battle for life.

Joey was born in Lake Edward, NB, on May 20, 1946. He was the son of the late Elmer and Louaina (Lennon) Hersey. He leaves behind his beloved confidant and friend Beth DeMerchant of Perth-Andover, NB; his daughter Marisa Hersey-Misner (Clayton) of Saint John, NB; his son, Lorin Hersey of Saint John, NB; his sister, Marion Cochran (Darral) of Des Moines, Iowa; brother-in-law, Firman Goodine (Diane) of Perth-Andover, NB; his uncle, Warren Lennon of Saint John, NB; several nieces, nephews, and cousins that he treasured dearly. He also leaves behind his dog Benny who misses him already.

Kenneth was predeceased by his parents; his brother, Robert Hersey; his sister, Linda Goodine.

Joe worked hard to provide for his family cutting wood at Frasers and on his own woodlot. As well as working for Raymond and Wayne Lawrence. Joe's favorite pastime was to hunt and walk in the woods watching or looking for wildlife. But if you couldn't find him out there you probably could find him in a brook fishing or playing guitar and singing at a music event. He never minded getting his hands dirty rebuilding motors for his trucks. Not least he loved spending time with family and friends. He will be greatly missed.

The family would like to thank Dr. Carter Kennedy, Dr. Allison Kennedy, and the nurses at Hotel Dieu of St. Josephs and Upper River Valley Hospitals for their professional care of Joe.

Joe's daughter and son were born with a rare eye disease called Aniridia; therefore, Donations to the Canadian Anirida Foundation, the local animal shelter as Joe loved his dogs, the Canadian Cancer Society, or Canadian Diabetes Association would be greatly appreciated.

Due to COVID a memorial service and internment will take place at a later date.

Arrangements have been intrusted to Brunswick Funeral Home, Perth-Andover, NB.