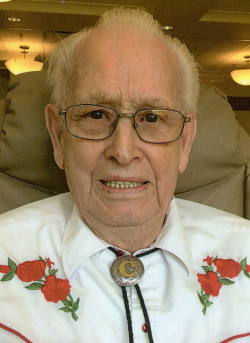 Cecil was born in Wicklow, NB, on August 31, 1924. He was the son of the late Guy and Elmira (Steeves) Watson. Cecil leaves behind his loving companion, Norma Smith; his daughter, Karen Watson of South Hampton, ON; his sons, Wayne Watson (Judy) of London, ON, Brian Watson (Joanna) of Salt Springs Island, BC, Ricky Watson (Jeannette) of Quaker Brook, NB, Harold Watson of Garibaldi Highlands, BC, Hazen Watson (Teri) of Black Creek, BC; six grandchildren and many great grandchildren; his sisters, Rose Merrithew of Hartland, NB, Pearl Murray of Rosedale, NB; his brother, Harold Watson (Iris) of Dundas, ON; along with many nieces and nephews.

Cecil was predeceased by his parents; his wife, Hazel Watson (Lloyd); his daughters, Diana Watson and Judith Watson; his sister, Nettie Sharkey; his brothers, Ralph and David Watson.

Music for the service was by organist Marianne Bell and soloist Sharon DeMerchant. The eulogy was given by Sheila Cummings