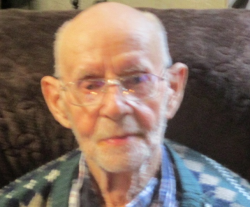 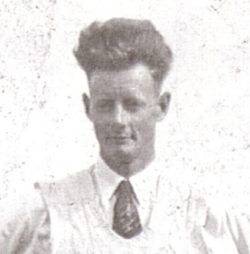 Earl Nelson Smith of Kincardine, NB passed away peacefully in his sleep at Victoria Glen Manor on November 22, 2021 at the age of 98.

He was born in Kincardine on September 22, 1923 to Alfred and Hannah (Johnston) Smith. He was the last surviving member of his immediate family.

He grew up living and working on the family farm. Before building and operating his own sawmill, he worked at various lumber and trucking jobs. After closing his mill in the 1960’s, he worked for H.J. Crabbe & Sons until the mid 1980’s. He then worked at Tobique Log Homes until he retired.

He enjoyed travelling and camping with his family, working in the woods, wood working, gardening, playing cards, golfing, dancing, listening to music, reading, and spending time with his family and friends. He was a member of Keenagers, Scotch Colony Brotherhood and helped out with the Melville United Church , The Burns Hall and Camp Woolastook.

Music for the service was by Isabel Morton and the church choir. The eulogy was given by Garth Farquhar.

The family would like to thank Dr. Allison Kennedy, Extra-Mural, the staff at Victoria Glen Manor, and a special thanks to the staff of Kindred Home Care for the excellent care allowing Dad to stay in his home until last month. Also a special thanks to Wendell (nephew) and Scott (friend) for all their help and visits over the last few years.