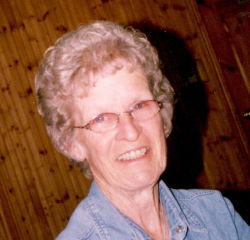 Following a lengthy illness, Edna Scott passed away peacefully at the Victoria Glen Manor on the evening of April 24, 2022.

Edna was born in California Settlement, NB, on December 12, 1943. She was the daughter of the late Howard and Helen (Pelkey) O'Neal. Edna leaves behind her sons, Robert Scott (Kathleen) of Fielding, NB, Tim Scott (Diane) of Woodstock, NB, Tony Scott (Joyce Mazerolle) of Fredericton, NB; her six grandchildren; her brothers, George O'Neal (Glenetta) and Aden O'Neal (Cheryl), both of California Settlement, NB.

Edna was predeceased by her parents; her husband, Carl Scott; her daughters, Karla and Lisa Scott; her son, Todd Scott; her grandchildren, Jennifer Fanjoy and Jeremy Scott; her sisters, Glenna Ledwith, Myrtle Swazey, and Ada Carpenter; her brother, Bernard O'Neal.

Respecting Edna's wishes, there will be no visitation or funeral service held. A graveside service will be held at St. John the Evangelist Anglican Cemetery in Four Falls, NB, on Sunday, May 1, 2022 at 3 pm. Rev. Harold Boomer officiating. A reception will be held at the Aroostook Fire Hall following the burial.

For those who wish, memorial donations to the NB Alzheimer Society would be appreciated by the family.