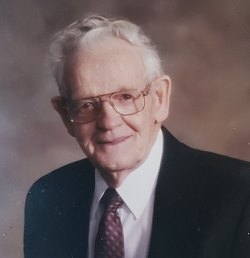 With his loving wife by his side, Herbert "Herbie" Goodine passed away peacefully at the Victoria Glen Manor on May 9, 2022.

Herbie was born in Tilley, NB, on November 13, 1926. He was the son of the late Reuben and Effie (Tompkins) Goodine. Herbie leaves behind his wife of 73 years, Audrey Goodine (Baker); his daughters, Gloria MacDougall (late Warren) of Fredericton, NB, Dianne Phillips (Barry) of Fredericton, NB; his sons, Gary Goodine (Loretta) of Hoyt, NB, Glen Goodine (Julia) of Tilley, NB; his daughter-in-law, Kathy Goodine-Jackson of Perth-Andover, NB; 13 grandchildren and 28 great grandchildren; his sister, Elva Larsen (Keith) of Florida; along with many nieces and nephews.

Herbie started his career as a meat peddler and a little later became a potato and cattle farmer. Eventually, Herbie became a welder and machinist. After working for Irving in Saint John for a while, he returned to Tilley and opened his own business, Tilley Manufacturing.

Funeral service was held on Friday, May 13, 2022 at 11 am from Brunswick Funeral Home. Pastor David Ferrell officiated. Interment followed in Hillcrest Cemetery.

Music for the service was by the Phillips Brothers. The eulogy was written by Dianne Phillips and presented by Barry Phillips. Comments were also shared by Gary Goodine.