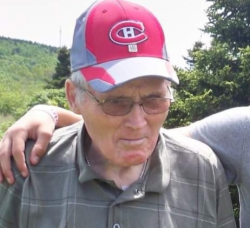 Following a lengthy illness, Chester Earl Innis of Perth-Andover, NB, passed away peacefully at his home on the evening of June 9, 2022.

Chester was born in Upper Kintore, NB, on December 21, 1937. He was the son of the late James and Violet (Wright) Innis. Chester leaves behind his daughter Margaret Ann Everett of Perth-Andover, NB; his sons, John Hanscomb of Fredericton, NB, Robert Innis (Shawna) of Red Rapids, NB; seven grandchildren and two great grandchildren; his sister, Isabel Brideau (billy) of Alberta; his brothers, Robert Innes of Woodstock, NB, John Innes of Ontario; along with many nieces and nephews.

Chester was an avid Montreal Canadians fan and just a fan of hockey in general. He never missed his grandchildren's hockey games. He could always be seen around the local arena waiting for the next game to begin. He also attended all of the River Valley Thunder's home games, until the last couple of years where is health did not permit him to make it to all the games.

Respecting Chester's wishes, there will be no visitation or funeral service held. A graveside service will be held on Saturday, June 18, 2022 at 11 am from Larlee Creek Cemetery. Rev. David Ferrell officiating.

For those who wish, memorial donations to the Victoria Tobique Minor Hockey Association would be appreciated by the family.

Chester's family would like to express their heartfelt gratitude to Dr. David Bell, the Extra-Mural nurses, and to Kindred Home Care for the care given to Chester over the recent years.