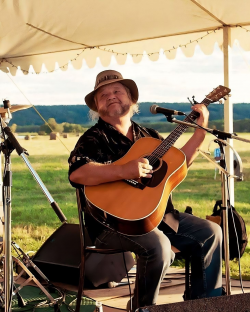 On November 4th, 2022, John Daniel Vallance peacefully left his earthly body to head out on his next big adventure. He left this world the way he lived in it, surrounded by loved ones and on his own terms.

Dan leaves behind his long-time partner Cindy Bray, his children Robin MacNeil (Tyson), Yarrow Vallance, Lucas Parkinson (Cherie) and Ebony Wade (Jay), all the beautiful bonus family Cindy brought to his life, his brother Glenn (Paulette), 11 cherished grandchildren, nieces and nephews, and a vast community of friends that will miss him dearly.

Born January 2nd as Yukon’s New Year’s Eve baby of 1955, Dan always had a strong sense of adventure. From hitchhiking across country and working on lake freighters as a young man, to sailing the Atlantic on a tall ship and having to be evacuated in the back of a dump truck from Guatemala to the Belize airport in his later years, both with his long-time partner in adventure, Cindy, by his side. He had a love for travel and a zest for life. Although Dan didn’t live as long as his loved ones would have wanted, he certainly packed a lifetime of experiences into his 67 years.

Dan was known for being an adored musician, having written many songs, including New Brunswick’s unofficial anthem “Back Roads of New Brunswick”. At any social gathering, Dan could be found with a guitar in his hands, possibly a harmonica around his neck and his accordion at his feet to switch to if needed, always singing in that sweet voice adored by so many. He played in several bands in his life, Keenan Bridge, Gerandan, Lost Puppies, but one of the most fun times in his life was as one half of the duo Stubby Fingers. If you ever had the pleasure of watching him and Matt perform, it was clear that they were having as much fun as the enthralled audience. Their big personalities and humor, just as entertaining as their incredible musical talent.

Dan was also known for his love of humor and wit. One of his favorite things was learning a new joke and sharing it with every friend he ran into, with a mischievous twinkle in his bright blue eyes. His friends and family would be just as excited to share their new joke with him. Dan loved to laugh and make other people laugh. As he liked to say, “if you think someone is normal, you just don’t know them well enough”.
Dan always had a strong sense of community; it was important for him to give back and build meaningful relationships. This led him to being quite involved in his local community, whether that be hosting potlucks with his “Valley” community or organizing events and sitting on multiple committees in his town of Perth-Andover. Still, he was able to make time for coaching hockey, helping a local family rebuild after a fire, and of course volunteering at many local events. He always understood the importance of relationships and bringing people together, which is likely one of the reasons he continued to host the famous “Summer Party” for over 25 years. A lot of people have expressed that Dan helped them form many of the relationships they most value.

Dan was a devoted father, uncomplaining in his constant ferrying of children to and from activities and friends’ houses. He was fun and playful with his children, the type of dad who thought it was a good idea to build a teeter totter that spun, or a zipline over the old pond. He spent countless hours making a hockey rink on that same pond, made up silly lyrics to songs on the radio in order to make his kids laugh, and had remarkable accuracy at finding that torturous ticklish spot right above the knee.

Above all else, Dan was dedicated to improving himself. He was quietly deeply spiritual and ultimately believed there was nothing of more importance than living a life in love. It Is abundantly clear that the people around him felt this when you hear them describe him as warm, loving, gentle, kind, patient, unjudgmental, inspirational, and an excellent listener.

Dan will be deeply missed by all those whose lives he touched. His loved ones find some solace in knowing how excited he was to see what comes next. He had no doubt that his soul will carry on and he would experience an afterlife in a place of complete love. While recently discussing his impending departure he stated, “there is no need for bravery, when you aren’t afraid”

His family would like to invite you celebrate the life of Dan Vallance. A service will be held November 7th at 2 pm at the Melville Church, with a reception to follow at the Burns Hall, both in Kincardine. Please dress however you are most comfortable, as Dan would have wanted.

In Lieu of flowers, donations can be made in his honor to “Dying with Dignity Canada”, or the “Canadian Lewy Body Dementia Research Fund”. Alternatively, you could bring a smile to his face by performing a small kindness in his memory.

Arrangements have been entrusted to Brunswick Funeral Home Perth-Andover, NB.