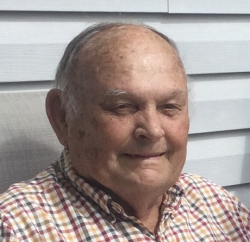 Following a period of failing health, Richard "Dick" Mavor of Perth-Andover, NB, passed away peacefully at the Upper River Valley Hospital on November 17, 2022.

Dick is predeceased by his parents, his brothers, Eugene and Robert Mavor.

Dick lived an adventurist life. He graduated from Southern Victoria in 1959 and went on to join the Navy where he travelled the world for four years. He resided in British Columbia and there developed the love of golf and became a golf pro. The family farm became available, back to New Brunswick he came.

At that time there was an opening for a golf pro at our famous Aroostook Valley Country Golf Club and Dick stepped up. He worked there for a number of years and fully enjoyed the job and the people.

He next move was to the Grand Falls Golf Club. After that, he came home to Lower Kintore and built his own golf course, "Lower Kintore Golf Club", later adding a sliding hill. We never knew what Dick was going to do next.

Dick loved his family, especially all his nieces and nephews. He always asked how they were doing and encouraging them to do better.

Resting at Brunswick Funeral Home with visitation on Monday from 1-3 pm. Funeral service will be held on Monday, November 21, 2022, at 3 pm from the funeral home. Interment will follow in the Melville United Church Cemetery, Kincardine, NB.

For those who wish, memorial donations to the Melville United Church Cemetery or the NB Heart and Stroke Foundation would be appreciated by the family.