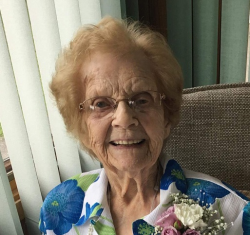 Helen Roberta (Lister) Miller died January 10, 2023, well into her 102nd year. The eldest child of Charles and Olla (Graham) Lister, she was born June 5, 1921 in River de Chute, NB. She is predeceased by her parents; her brothers, Earle and Alan; her sister Phyllis and her family (husband, Clainie, and sons, Randy and Stewart); and her beloved husband, Donald W. Miller, with whom she was married for 45 years. Helen leaves behind her only child, Ann; son-in-law, Gaétan Haché; grandchildren, Emily (Stephan Labbé) and Charles (Elise Bingeman); great-grandchildren, George and Josephine Labbé; and kind and caring cousins and friends.

Always determined and resourceful, Helen attended high school in Andover by boarding with an uncle and aunt, Gordon and Elizabeth Graham, in Perth. She went on to nursing training in Saint John, then after a pause due to illness, completed her training in Spring Hill, NS, to become a registered nurse. Following her marriage in 1950, Helen returned to Andover with her husband, settling close to both of their families. Helen became a homemaker, supporting Don in his woodworking and building supply business, and a mother. She was involved in church activities, first at St. George’s Anglican Church in Bairdsville as a child, then at Trinity Anglican Church, Andover, following her marriage. Having always enjoyed reading and history, Helen became very interested in genealogy, collaborating frequently with her cousin Pat Stringham in Connecticut to compare notes and visit graveyards around the province of NB. She corresponded over the years via letters and phone calls with others to track elusive ancestors and to stay in touch with descendants of those she found. Lines were documented back several hundred years to Scotland, Ireland, and England, with some of those immigrants to the American colonies moving northward into Upper and Lower Canada as Loyalists after the American Revolution in the 1770s-80s.

Helen also enjoyed quilting with her mother, knitting and sewing. Fortunately she passed along some of these skills. She also passed along her spirit of independence and fortitude, insisting that a young woman should not leave home without an education and a driver’s license. Helen was proud of the home she and Don designed and built in 1970. One of her greatest pleasures was being able to stay in her home until near her 101st birthday. Dedicated day and night caregivers, and kind and helpful friends enabled this and she appreciated every minute of it. Sitting in her sunroom was her favorite place to be. She watched the world go by her front door and was happy.

A celebration of Helen's life will be held in the summer of 2023 when the family is all able to gather. The service will be held at Trinity Anglican Church with burial to follow in St. George's Anglican Cemetery in Bairdsville, NB.

For those who wish, memorial donations to World Vision or the NB Alzheimer Society would be appreciated by the family.