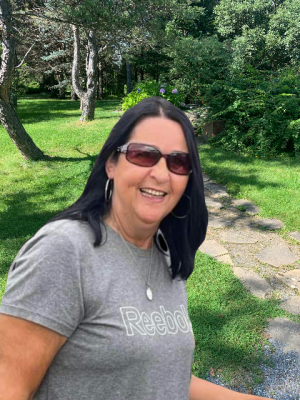 Following a brief battle with cancer, Nilda "la corneille" Martin of Crombie Settlement, NB, passed away peacefully at the Grand Falls General Hospital on the evening of January 20, 2023.

Nilda was born in Grand Falls, NB, on October 5, 1962. She was the daughter of Yvonne Bonsant (Leclerc) and the late Alfred Bonsant. Besides her mother, Nilda leaves behind her husband, Urbain Martin; her sons, Daniel Desrosiers and Pierre (Kim) Desrosiers, both of St-André, NB; her grandchildren, Danie, Mathieu, Tiffany, Mayson, and Jayden; her sisters, Alynn St-Amand (Adrien) of St-André, NB, Gisèle Bonsant-Johnston (Mason) of Moncton, NB; her brothers, Roger Bonsant (Cheryl) and Richard Bonsant (Lise) both of Ontario and many nieces and nephews.

Nilda was predeceased by her father; her brothers, Sylvain, Yvon, and Onil Bonsant.

Respecting Nilda's wishes, there will be no visitation or funeral held. Interment will be in Ste-Anne-de-Madawaska, NB, at a later date.

The family wish to kindly thank the healthcare workers of the Palliative Care Unit of the Grand Falls General Hospital for their excellent care.